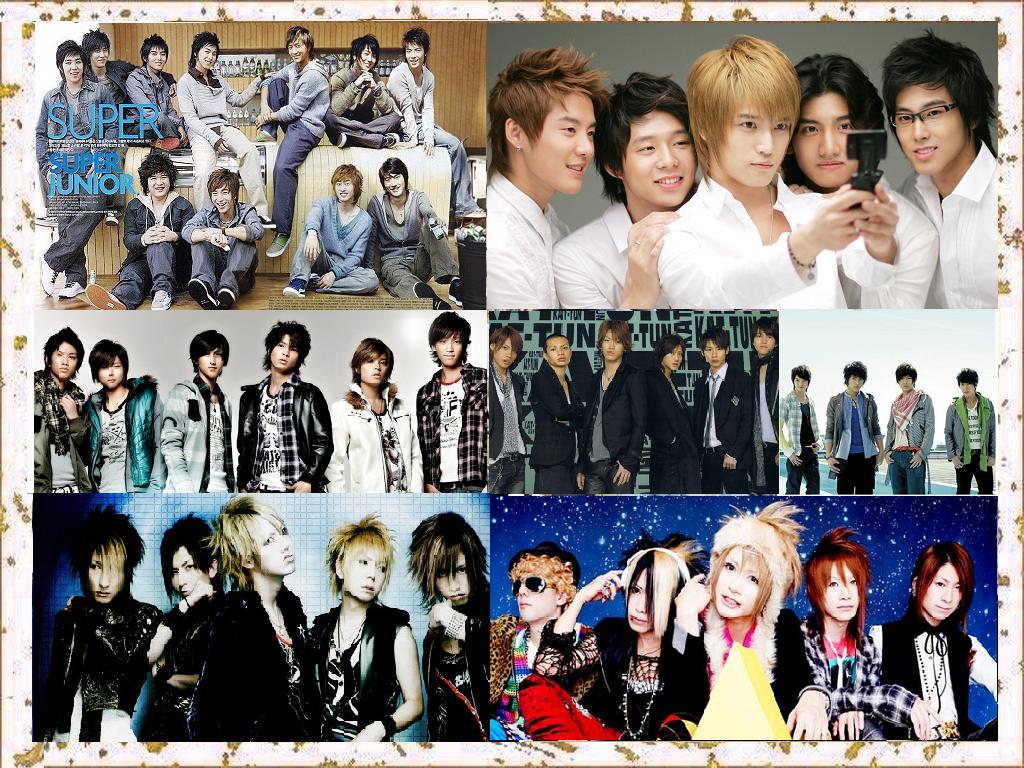 Position in FRH: 41 degrees Fahrenheit, cold (winter) and the youngest there

Favorite Actor: Andy Lau
Favorite Actress: Ariel Lin
Favorite Male Singer: Harlem Yu and JJ Lin
Favorite Female Singer: Lin Fan and Fish Leong
Favorite Genre of Music: soul, rock, pop, R&B, hard rock, and, jazz
Favorite Things: thoughtful things
Favorite Colors: green, blue, yellow, and, black
Favorite Part of a Female: personality is more important; must be genuine (he doesn't like fake things)
Currently the youngest member of the popular Taiwanese boy band Fahrenheit, Aaron Yan was born on November 20, 1986. At a young age, his family moved to New York, USA, where he stayed for his primary education for about five years. He then moved back to Taiwan for secondary education. He can speak and understand Mandarin, English, Hokkien, limited Japanese and Cantonese.
* Arron was discovered as a popular blogger, Comic discovered him and asked him to take on a role in a drama, at first he thought it was a fraud, but he realized that it was true
* Arron is scared of cockroaches
* Arron has played the piano since he was little, for at least 10 years
* Arron also plays the flute 3years ago, he started to learn it cause it looks like a weapon
* Arron tore a ligament in his knee twice, once during Fahrenheit's first album promotion period in 2006, the second time they found out was during a checkup that it had torn again
* Arron doesn't update his blog as much as his group mates

* When Fahrenheit is overseas for promotion, Arron shares a hotel room with Jiro
* Arron has an earring, which was given to him by his ex-girlfriend which died in a car accident, you always see Arron wearing a diamond earring, and it is square
* Arron's first love was with a girl he knew online and he was 16 at the time,
they met up 6 times during their relationship, and the first time they met up they kissed. They talked to each other on the phone or by instant messaging
* Arron sang a birthday song with the tune Chu Shen Ru Hua, during promotion of Fahrenheit second album
* Arron collected stamps for 6 years, but he doesn't have a lot because he used some while he was collecting
* Arron never wears shorts
* Arron loves eel rice 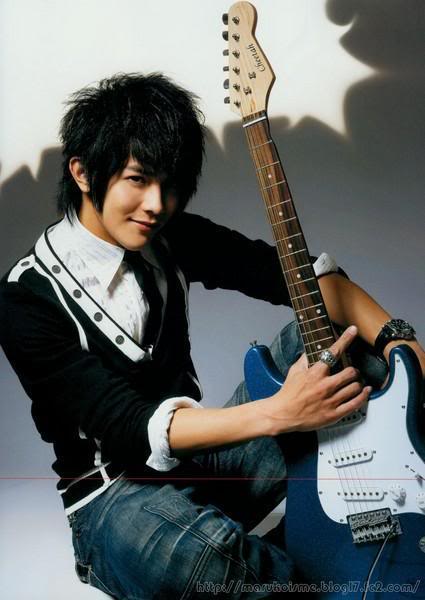 Jiro Wang was the first member to join Fahrenheit. He is the baritenor vocalist of the group. His publicized temperature is that of hot Summer, at 95 degrees. He also represents "Hot". His fellow members include Wu Chun, Aaron Yan, and Calvin Chen.

Jiro was born August 24, 1981 in Taiwan. He graduated at Fu Shin Trade and Arts College with a degree in Advertising Design. After his graduation he dedicated his life toward the entertainment business. He was first asked to join the entertainment business because of his good looks and singing talent that he showed at a singing competition. BMG, the label that signed him, planned to package him with Jay Chou and Jordan Chan to form a boyband called 3J, but because of 9/11, BMG's stocks crashed and the 3J plan was scrapped. Wang Dong Cheng then decided to continue his career in the industry by working backstage, mainly in charge of fashion designing and other designing necessities, as well as commercial modeling. He was approached again around 2004, when his acting career began.

He speaks fluent Hokkien and Mandarin, and understands conversational Cantonese and English.
He used to play in an underground band named Karma as lead singer. They have performed a song called 人間逃亡記, lyrics composed by Wang. After that, the band changed the name to Dong Cheng Wei. However, the members in the band remains the same.
We always see Jiro as a bubbly person that is always happy, but how many people really know about his past and what he has gone through? Jiro has always brought everyone around him happiness, but he has gone through so much suffering himself. Once he told A Chord; "Never shed a tear for the stress from work, because it's your choice!" What he said fits Jiro so much. No matter how tired Jiro is, he will always keep on going and give everything his 100% percent. Do you see his eyebags? That is proof! Jiro has gone through a lot, but he is always pushing himself and striving forward and not complaining. This is why we love Jiro so much.

Jiro's father was a regular manager for a building, and his mother didn't work because of old age and bad eyesight. They had Jiro when they were around 40. Maybe because of being born late, Jiro's health wasn't very good, but his mother and father loved him a lot. Later, Jiro's father had diabetes, so he went in and out of the hospital for 5 years. However, Jiro's father still passed away when Jiro was 17. Before he died, he said to Jiro: "You have to take up the responsibility of this family." And from then on, Jiro was the man of the house.
Probably it was since then, to support the family and to return loans [When his father was still alive, he borrowed aprox. 6 million yuan from the bank to buy the house they now live in.] He began to take part-time jobs everywhere, sometimes he worked 3 shifts a day. He worked in a bar, in a zoo, and some people even says that he worked to transport coal! At around that time, Jiro started to model part-time. Then the BMG Company saw potential in him, so they were going to sign Jiro, Jay Chou, and Jordan Chen to the 3-J Plan. But sadly, the 911 incident happened, part of the company's market was corrupted, and of course, as a new idol, Jiro was fired on the spot. But Jiro didn't give up, he signed another company, but after he found out that they weren't interested in making him into an idol, he felt completely beat. So he joined the Army for 2 years. When he came back, he decided to be a Modeling Assistant, since he doesn't have the courage to return to the stage and make his dreams come true anymore. At that time, he was pretty well known among the Taiwan Entertainment Market, everyone knew there was this guy who had a guitar on his back and followed the Modeling Stylist everywhere. Also at this time he met a lot of Commercial Producers, so later he began to act in commercials.
Then one time he met the President of the Ke Mi Company, but when they wanted to sign him to a contract, he hesitated. Because of so many failures before, he couldn't help but feel worried and afraid. Then he remembered something a person said to him before: "When you're old, you're going to say to your son, son, your dad had a dream, but he didn't have the courage to chase it ..."
When he remembered what this person said to him, Jiro got the courage to try again. Then shortly afterwards, Jiro was given the opportunity to act in ISWAK as Ah Jin, and WAHLA. Jiro got his big break!
* Jiro ex gf posted pictures of him in her blog [Abranda]
* Jiro got cheated on before, but he actually the third person in the love triangle
* Jiro also liked a girl that is a senior to him, but he was too late to confess
* Jiro is really care about his looks, he used his band mates eyeballs as mirrors before
* Jiro sprays his hair A LOT
* According to Genie and Xiao Xun, his co-stars in Rolling Love, the time Jiro used for his make up and his hair is twice as much as Xiao Xun and four times as much as Genie
* Jiro use two mirrors, one in front and one at the back, so he can fix his hair at the back
* when Fahrenheit is doing promotion over sea, most of the time Jiro shares a room with Arron.
* Jiro is afraid of cows, because he fell off from them once when he was little
* Jiro is the pose king, he can do 20 poses in 20secs, or even more....
* Jiro has poor health because his mom had him when she was old
* Jiro was sick through out the whole year in 2007
* Jiro formed a band in high school with his friends, named Dong Cheng Wei, the members are Dong, Xiu, Deng, Ming, Jie
* Jiro`s dad is Cantonese, so Jiro is Cantonese too
* Most of the time, Jiro wears clip on earrings, he didn't pierce his earrings 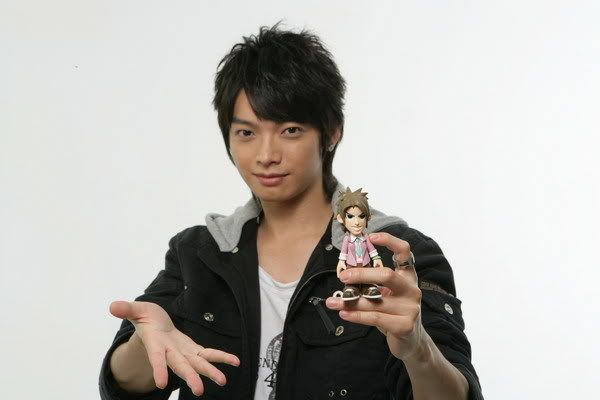 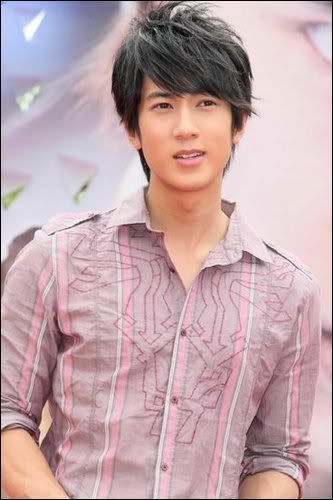 喜歡的食物： 我很愛吃,除了油膩的食物我甚麼都吃。
I LOVE EATING THEREFORE I EAT ANYTHING
EXCEPT OILY AND FATTY STUFF

最討厭的事情：失去我身邊最重要的人
LOSING THE PERSON CLOSE TO ME

最偉大的願望： 在生命裡做個好與事業有成的人
BE A NICE AND SUCCESSFUL PERSON IN LIFE

做過最難忘的事情： 在照顧去世前的媽媽
TAKING CARE OF MY MUM BEFORE SHE
PASSED AWAY

it said the English part is written by Wu Zun himself 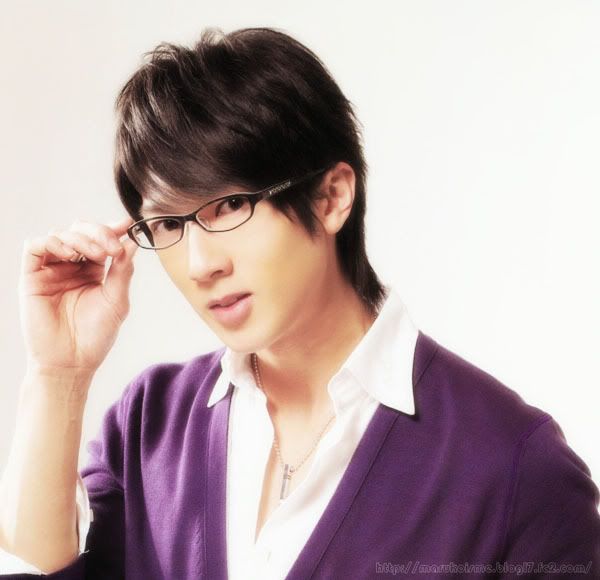